On August 10, 1989, Dave Dravecky took the mound to pitch for the San Francisco Giants. 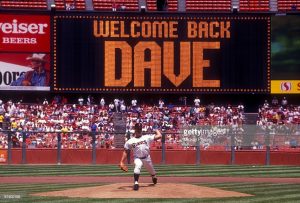 As you can see from the picture, he was warmly welcomed back by the fans. Why is that so remarkable? Well, it’s because Dravecky had endured surgery to remove a tumor in his deltoid muscle in 1988. The doctors informed him that he would never pitch again. Dravecky spent over a year rehabbing and recovering, determined to get back on the mound. And on August 10, he pitched the game of his career. He went 8 innings of 3 run ball in defeating the Cincinnati Reds. However, his next outing on August 15, 1989, in Montreal would end his career and change his life forever. Dravecky pitched three no-hit innings, but in the fifth inning, he felt a tingling sensation in his arm. In the sixth inning, he started off shaky, allowing a home run to the leadoff batter and then hit the second batter, Andres Galarraga with the pitch. Then, on his first pitch to Tim Raines, his humerus bone snapped; the sound of it breaking could be heard throughout the stadium. Dravecky fell to the ground, writhing in pain. Eighteen days later, doctors informed Dravecky that cancer had returned to the arm. For the next two years, Dravecky endured surgeries and therapy. Then, on June 19, 1991, doctors amputated his shoulder and arm.
Dravecky, a Christian, went through an emotional rollercoaster – anger, depression, and disbelief. Yet, his faith in Christ kept him going. Dravecky, “When I broke my arm, I knew there was something a lot bigger than baseball (about to happen) … I had a sense that God had something for me, something bigger than baseball.” Today, Dravecky is a motivational speaker and helps people overcome their adversities.
As believers, we are promised adversity, sometimes it is from the world and other times God allows things to happen to us. And nothing will stop or hinder God’s plans for our lives. The Apostle Paul reminds us, “And I am sure of this, that he who began a good work in you will bring it to completion at the day of Jesus Christ” (Philippians 1:6). The verse promises that God is at work in our lives, whether we sense His divine plan or not. God is at work! We overcome adversity by trusting him daily and knowing that He will fulfill the work He began at our salvation! Just trust Him!
God bless,
Pastor Mike