At the height of immigration into the United States 1880-1921, there were only two inspections. The immigrant’s papers were checked and a physical was conducted. Only 2-5% were not allowed into the country either because of suspicious papers or physical problems (e.g. cholera, influenza, tuberculous and other communicable diseases). However, because of a large number of immigrants flowing into America, Congress passed the Immigration Act of 1924. 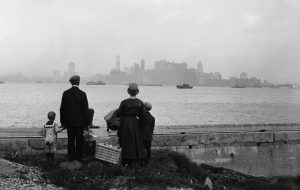 The bill passed Congress with bipartisan support 323 to 71. The Act limited the number of immigrants to 2% of each nationality. Southern Europeans were particularly scrutinized and the vast majority were not allowed into the country. So, 1924 seems to be the point where America began to tighten its borders and restrict entry into the U.S. There were many other restrictions in the Act of 1924, but I am trying to keep this short. I would encourage you to read it for yourself.
The hot topic of immigration reform in our country today has me thinking about entrance into heaven. A majority of people believe that all “roads” lead to heaven. So, whether you are a Christian, Buddhist, Agnostic, Muslim or other religion, you will get into heaven. However, Jesus says that only those who come to him will be admitted into the Kingdom of God. Jesus told Thomas, “I am the way, and the truth, and the life. No one comes to the Father except through me” (John 14:6). In a world that believes everyone goes to heaven, Jesus declares that He is the only way to God. While God is loving, merciful and full of grace, He has provided only one way to reach Him – Jesus Christ! Those who accept Christ by faith are the only ones who will be admitted into the Kingdom. All other roads are closed! There will be an inspection, not of your documentation, but of your faith! Make sure you have the right faith! Trust in Jesus Christ as your Lord and Savior! Then, you will be welcomed into the land of real Liberty and Freedom! At liberty to worship God and freedom from sin, bondage and death!
In Christ, Pastor Mike