Ireland has officially overturned years of anti-abortion laws protecting the fetus. The final vote was 66% to 34% in favor of allowing women the right to choose to end a human life. Although this defeat is tragic and morally unacceptable, Americans are starting to shift in their opinions of abortion. 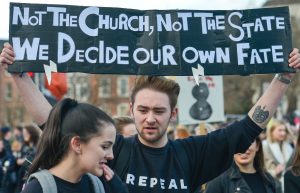 According to Rasmussen poll taken earlier this year,  49% of likely U.S. voters now consider themselves pro-life, while 46% say they are pro-choice. While 5% are undecided, this same voting group believes that abortion should be restricted. We are starting to move the needle in the right direction. So, why are Americans starting to slowly move toward protecting the unborn? Well, there may be several reasons for the change.
First, Americans are becoming more conservative. Yes, I said more conservative. The last election points to a middle-America uprising which has not been witnessed in decades or possibly ever. If you take away the California vote, conservatism swept across the nation. This reaction is partly due to the eight years of liberal ideology and the results of that ideology on mainstream America. We saw a record increase on a dependency upon the State, a decline in our moral fiber, an increase in crime, loss of jobs and a general sense that the nation was moving in the wrong direction.
Second, and perhaps, more importantly, science and what we know about conception is having a huge impact on public opinion. Scientists are now leading the way in understanding the fetus. New technology is revealing some previously unknown facts. Science is now discovering that the fetus feels pain, can hear sound including recognizing the mother’s voice, laugh and cry. These findings are helping the pro-life cause. Armed with this new information, Americans are beginning to turn against the pro-choice movement. While we are not completely there yet, thank God for scientific breakthroughs.
Finally, we are slowly moving toward protecting life. God and the Bible have always been on the side of the unborn. Exodus 21:22-23,  “When men strive (fight) together and hit a pregnant woman, so that her children come out, but there is no harm, the one who hit her shall surely be fined, as the woman’s husband shall impose on him, and he shall pay as the judges determine. But if there is harm, then you shall pay life for life.” Although there are many other passages that support life, God is still the author of human life and desires these precious babies to be protected from harm. Keep praying!
in Christ,
Pastor Mike