During my Army days in the 80s, I made four trips to South Korea. On three of those occasions, I was on the DMZ (The Demilitarized Zone). I remember looking into North Korea with armed guards looking back at me. At that time, my focus was on the enemy in the north. 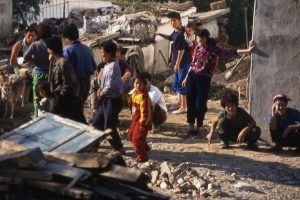 Our goal was to protect the South Korean people and provide a show of force along the border. However, today I have a much different view of North Korea. Maybe because I understand the real situation in the Korean peninsula and partly because of my growing faith in Christ. As a pastor, I have become sympathetic to the plight of the people. In short, I no longer view them as the “enemy” but a people in crisis.
Here are some undeniable facts about the situation in North Korea:
1. The average worker makes $2 or $3 a month. It is hard to imagine in the economically driving culture of today that people could possibly live on that amount of money.
2. 84% of Korean households have borderline or poor food consumption. In practical terms, it means the people are eating a poor quality of food. We have become spoiled as a nation. We drive 5 minutes down the road and shop for quality food. The people in North Korea do not have that luxury. They are forced to eat sub-standard food. And worse of all, the children are deprived of vital nutrients they need for growing healthy bodies.
3. 48% of North Koreans live below poverty. Think about that for a moment. This means that roughly half the country lives in a state of poverty. Images taken from space reveal the horrible, real-life conditions of the people.
4. 200,000 North Koreans live in concentration camps. We know the Jews suffered during WWII in Auschwitz and Dachau. The world promised never again would people have to suffer the horror of these camps. But, these camps are alive and well in the north. If a person manages to escape, often their entire families are killed. And 40% of the prisoners interned at these concentration camps die of malnutrition. It simply is horrific.
5. Kim Jong Un has instituted a three-generation punishment. So, if your grandfather committed a crime, the next three generations will pay the price. This is partly to keep generations oppressed and to establish an authoritative rule.
6. The government spends 5 Billion dollars on the military and weapons. So, the military consumes over 30% of the annual budget. Another large portion of the budget goes to the affluent few. This leaves the average person with very little.
When President Trump announced today that the summit has been canceled, my heart sunk because of the people. As Christians, we should be on our knees begging and asking God to intervene. So, I would like to encourage every Christian to pray daily for the people in North Korea.
In Christ, Pastor Mike