George Whitefield was born on December 27, 1714, in Gloucestershire, England. According to many scholars and historians, he was one of the greatest preachers of all time. Whitefield was instrumental during the Great Awakenings which took place among the American and British colonies during the 1730s and 1740s. Newspaper articles during his lifetime dubbed him as the “Marvel of the Age.” Historians note that George Whitefield preached over 18,000 sermons to nearly 10 million listeners. As a young boy, he loved studying theatrical plays and would often skip school to read them. 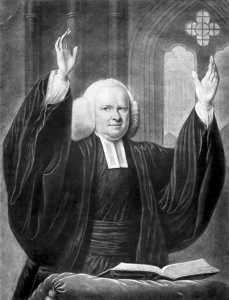 At Pembroke College in Oxford England, he paid his way through college by waiting on wealthier students. During his college days, he joined the pious Methodist group called “the Holy Club.” It was during those meetings under the tutelage of John Wesley that Whitefield received Christ. After his conversion, he wanted to go to the Georgian colony in America to be a missionary. However, the journey to America was delayed and so he began preaching in and around London. Whitefield soon realized that he was a gifted preacher as people hung on his every word and the crowd sizes began to grow with each passing sermon. His early love for theatrical performances helped shape his presence in the pulpit. Whitfield did not read his sermons but preached extemporaneously without notes. People had never heard this type of sermon before and thus the big attraction. He was not a doctrinal preacher but preached more on biblical characters. Whitefield eventually did make it to the Georgian colonies in America but stayed only three months. During his time in Georgia, he established an orphanage which left him in debt the rest of his life. After his three months stay in America, he returned to England, but the congregations were not receptive to his style of preaching. Then, in 1739 George Whitefield returned to America and preached a revival in Philadelphia which was one of the largest colonies at the time. Since 8,000 people attended the revival, Whitefield was forced to move out into the fields. In most places that he preached, the attendance outnumbered the size of the city. His revival meetings would start in the evening and sometimes go until two or three o’clock in the morning. It was during this time that the Great Awakenings were happening and it was not uncommon for him to preach to more than 20,000 people at one time. Whitfield made the trip back and forth between the American colonies, England and Scotland on numerous occasions. The crowds were huge everywhere Whitefield preached and was the most recognizable person in America. It has been said that when Whitfield opened his mouth to preach, you could’ve heard a pin drop. Even in his later years, Whitefield refused to slow down his preaching schedule. He once said, “I would rather wear out than rust out.” His last sermon took place in the fields while preaching on top of a barrel. The next morning on September 30, 1790, the great orator George Whitefield died.

I. Show you what the nature of repentance is.

II. Consider the several parts and causes of repentance.

III. I shall give you some reasons, why repentance is necessary to salvation.

IV. Exhort all of you, high and low, rich and poor, one with another, to endeavor after repentance.