I am excited to begin a new preaching series entitled: The Preacher’s Series. During the five-week series, we will examine five of the greatest pastor’s who ever preached. The series is designed to give a broad stroke over the past five hundred years. Although it is impossible to identify all the great preachers, I have focused on five men who contributed in a significant way to the Kingdom of God and reflects the sermon methodology of the era. I will give a brief biography of each preacher, provide the actual outline used during the sermon and illustrate by using selected quotes from the preacher during the sermon. My hope and prayer is that the congregation will grow deeper in the faith and that God will speak through voices from the past.

The first preacher on the list is John Bunyan. He was born in November 1628 in the town of Elstow about one mile south of 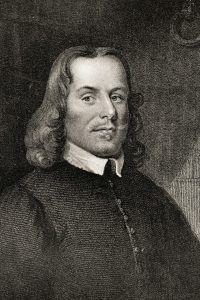 Bedfordshire England. His family knew the sting of poverty. However, his parents were able to send their young son to school. He once said, “It pleased God to put it into their hearts to put me to school, to learn me both to read and write.” Even at a young age, he understood the divine intervention of God. The majority of historians note that John Bunyan was an exceptional student who excelled in his studies. When his mother died in 1644, his father remarried again within two months. Unfortunately, this caused a division with his father. John spent the next three years as a soldier. After separating from the military, John married. However, there are no records of the marriage on file. From the Practice of Piety, he writes, “This woman and I, though we came together as poor as poor might be (not having so much household stuff as a dish or a spoon betwixt us both), yet this she had for her part.” After his marriage, the next four years were an intense spiritual struggle. Hence, the writing of Abounding Grace.  It was years before he found peace with God. One of the most influential people in his life was John Gifford who was the pastor of an independent religious congregation. In 1653, Bunyan joined the congregation and in a short period of time became a deacon. Then in 1658 at the age of 30, John Bunyan received his call to preach. His most famous work The Pilgrim’s Progress was published in 1678. In my estimation, the work is a reflection of Bunyan’s own spiritual journey. Bunyan began writing the book while in prison at Bedfordshire County prison for violating the Conventicle Act which prohibited holding services outside of the Church of England. The writing is a Christian allegory of the progression of the Christian faith. Since its publication, the work has been translated into 200 different languages. The book has never been out of print. He died August 31, 1688, in London, and is buried in Bunhill Fields in Finsbury. Like so many preachers, his life and experiences shaped his preaching and understanding of the Scriptures.