Alexander MacLaren was born in Glasgow Scotland on February 11, 1826. His father, David, 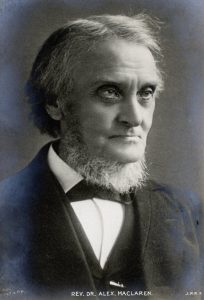 was a lay Baptist preacher who no doubt had an influence on his young son. When his father left for Australia on a three year business trip, he returned home to find that Alexander had given his life to Christ and had received baptism. Although records are sketchy as to the actual date of his conversion and baptism, we do know that he baptized at Hope Street Baptist Church in Glasgow. Alexander would have been around the age of 12 years old when he trusted in Christ. At the age of 16, Alexander entered Stepney College, a Baptist College in London. He was influenced by Dr. David Davies and became a serious student of Greek and Hebrew. Alexander’s sermons reflect his in-depth understanding of the language. After receiving numerous awards in biblical languages and graduating with a B.A. degree from the college, he was called to his first church at 21 years old. During his first pastorate at Portland Chapel in Southampton, he quickly established himself as a polished and powerful preacher.  He stayed at Portland Chapel for 12 years, then was called to pastor Union Chapel in Fallowfield in Manchester England. Alexander remained at Union Chapel until he retired in 1903.
As to the sermons of Alexander MacLaren, he is known in preaching circles today as the “Prince of Expositors.” Alexander believed that preaching was the sole task of the minister. It has been said that when Alexander entered his study, he removed his shoes and put on work boots to remind him that studying the text and writing the sermon was real work. Because of his intense study, he delegated other ministry duties to lay people. Scholars acknowledge that Alexander was a much better preacher than a writer. He had pinned-up nervous energy when he preached but it served him well in the pulpit. His sermon titles were bland but biblical, always encompassing the text. His sermons had three points (I, II, III) and they were clearly organized for effectiveness. His written sermons averaged about 4,000 words and would have taken between 30 and 40 minutes to preach. Alexander shied away from discussing current events or local news, which he has been criticized for by some scholars. However, I believe the criticism is unwarranted and many preachers today stretch biblical truths to connect to contemporary issues. Furthermore, he was a master illustrator and employed metaphors to strengthen his main points. On a whole, MacLaren is one the greatest preachers in history. As a young pastor, I studied his sermon methodology in bible college and have come to appreciate his dedication to the task of preaching. Alexander died May 5, 1910 in Edinburgh. The “Prince of Expositors” remains the gold standard for preaching.