The Magi from the East

One of my favorite accounts surrounding the birth of Christ is the Magi from the east. 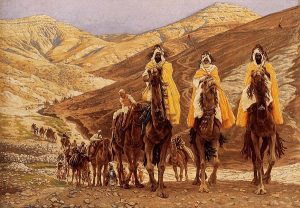 Many movies, articles, and figurines depicting the wise presenting their gifts in Bethlehem at the birth of Jesus are inconsistent with the Scripture. Matthew 2:9 says, “When they heard the king, they departed; and behold, the star which they had seen in the East went before them, till it came and stood over where the young Child was.” First, I am sure Matthew is able to distinguish the difference between an infant and a child. If he would have used the word “infant” or “baby” in describing Jesus, then we could assume the wise men were present at the stable. But, Matthew calls Jesus a “young child” indicating the Savior was not an infant. Second, Matthew 2:11 says, “And going into the house, they saw the child with Mary his mother and they fell down and worshiped him.” Unlike the stable narrative which often appears in movies and plays; the wise men go into a house, not a stable. Third, King Herod orders the killing of every male child two years and under, “Then Herod, when he saw that he had been tricked by the wise men, became furious, and he sent and killed all the male children in Bethlehem and in all that region who were two years old or under, according to the time that he had ascertained from the wise men” (Matthew 2:16). It is my contention that the Magi started their journey when the star first appeared. Since the wise men traveled from Persia (Iran),

the journey was a little over 1,000 miles and would have taken 18-24 months on a camel. The journey was dangerous so the Magi would not have traveled alone (see picture above). The wise men would have needed water, food, tents and other items for survival not to mention security. So, I believe the wise men didn’t arrive for nearly two years. This helps explain King Herod’s edict to kill all children two years and younger. In closing, the wise men stand as an exceptional model for the Christian faith. They blindly followed a star across many miles just to see this King, who was born to take on the sins of the world and bring redemption for those who believe in Him.

May God bless you this Christmas season!