John Calvin (1509-1564) was a theologian who is supposed to be the so-called “Father of Calvinism.” Although based on the tenants of his teaching, Calvinism didn’t emerge until later. Calvin’s followers developed and refined his teachings over time. Many have heard the term “Calvinism” 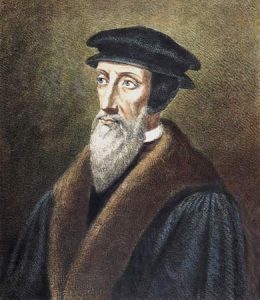 but don’t really know that much about it. The explanation of the teaching is summarized in the word TULIP.
T = Total Depravity. The human condition is such that man is unable and incapable of understanding anything apart from the influence of God. So, man is blind to the gospel and is unable to even consider the gospel without the direct enlightenment of God.
U = Unconditional Election. Calvinists teach that God pre-chose those who would be saved and those who would be lost. And since mankind is unable to reason the gospel in the mind, it stands to reason that God will only quicken the mind of those He is going to save. The lost have no chance because God has already chosen them to spend eternity in hell.
L = Limited Atonement. Furthermore, it stands to reason that if God has already chosen those who are to be saved, then the blood of Christ only applies to the elect of God.
I = Irresistible Grace. Since God is going to save His chosen people, He will draw them to the cross. The grace that God offers will be so irresistible that they will be unable to fight against it. They will be saved because God has ordained it to be so.
P = Perseverance of the Saints. Once the chosen person is drawn to the grace of God, that person will persevere until the end. In other words, those that God has chosen, redeemed by the blood of Christ will continue to be saved until they arrive in the Kingdom.
Although the system sounds good in theory and is an attempt to understand the work of God in redemption, it is flawed like many other theological schemes.
First, it is not God who blinds the mind of man, it is Satan. 2 Corinthians 4:4 clearly states, “The god (satan) of this age has blinded the minds of unbelievers, so that they cannot see the light of the gospel that displays the glory of Christ, who is the image of God.” The entire system of Calvinism is short-circuited just on this single verse. There are other verses, but that would require a much longer article.
Second, by way of argument, if God has chosen some to be saved and some to be lost, then it is possible to be duped into believing you are saved when in fact you are not. You can’t really be sure if you are chosen or not. Since the mind is total depraved, it is possible to believe something that isn’t true.
Third, any system is suspect because it originates in the mind of man. I do not hold to man’s teachings or follow cleverly designed systems. Let the Bible speak for itself. 2 Peter 3:9, “The Lord is not slow to fulfill his promise as some count slowness, but is patient toward you, not wishing that any should perish, but that all should reach repentance.” God desires all to be saved! But, because of human sin and the work of Satan, some will reject the gospel. We do have a free will to respond to the gospel. Remember, there are no innocent bystanders in hell.