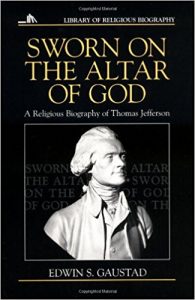 I am currently reading Edwin Gaustad’s book, “Sworn on the Altar of God.” The book is a biography of the religious life of Thomas Jefferson. Thomas grew up during the period known as the age “Enlightenment.” Reason and nature were the capstones of this period. A portion of the book addresses the issue of the depravity of man, which came under severe scrutiny in the late 1700’s. Was man so depraved, that he could not reason his sinful condition before a holy and righteous God? Ethan Allen, a critical genius, in my opinion, noted: “if reason were totally depraved, how then do we distinguish between a rational being and a madman?” Furthermore, Allen explained that those who argue for the total depravity of mankind, do so by way of reason which they claim is depraved. So, where am I going with this?
Faith, by its very definition in the Greek, is trust or complete reliance in something. In our case, it is complete trust in Christ – his nature, his miraculous birth, his sinless life, his substitutionary death on the cross and his glorious resurrection from the dead. But, it is not a blind faith, nor should it be only a blind faith. For example, the Bible reveals that there were over 520 witnesses to the resurrection of Christ from the dead. We have clear evidence from historical records that Jesus was a real person, who performed miracles and taught about the Kingdom of God. Christians have not only a strong faith but a faith that can be argued in a sinful culture. The Apostle Peter wrote, “But in your hearts honor Christ the Lord as holy, always being prepared to make a defense to anyone who asks you for a reason for the hope that is in you; yet do it with gentleness and respect” (1 Pet. 3:15). No, brothers and sisters, we do not have a blind faith!